Steroid 5-alpha reductase type 3 congenital disorder of glycosylation (SRD5A3-CDG, also known as CDG-Iq) is an ultra-rare genetic disorder that results in developmental delays and problems with vision. SRD5A3-CDG is caused by defects in glycosylation, a process in the body which involves the attachment of ‘sugar trees’ (called glycans) to proteins and fats in cells throughout the body. Glycosylation is important for the proper function of proteins and lipids in many systems of the body. SRD5A3-CDG is caused when an individual has mutations in both their copies of the  SRD5A3 gene which provides instructions for making an important enzyme – polyprenol reductase – that is involved in glycosylation. SRD5A3-CDG belongs to a group of 170+ rare genetic disorders that are caused by defects in glycosylation called Congenital Disorders of Glycosylation.

To date, over 50 SRD5A3-CDG patients have been reported in the medical literature. The homozygous nonsense mutation c. 57G>A, p. (Trp19Ter) is the most common mutation reported in patients and results in the production of a truncated, non-functional protein. This mutation also appears to be associated with early-onset retinal dystrophy in patients.

As SRD5A3 belongs to the steroid alpha-five reductase family of enzymes, it also plays a role in regulating the product of steroid hormones by catalyzing the conversion of  testosterone (T) into 5-alpha-dihydrotestosterone (DHT). 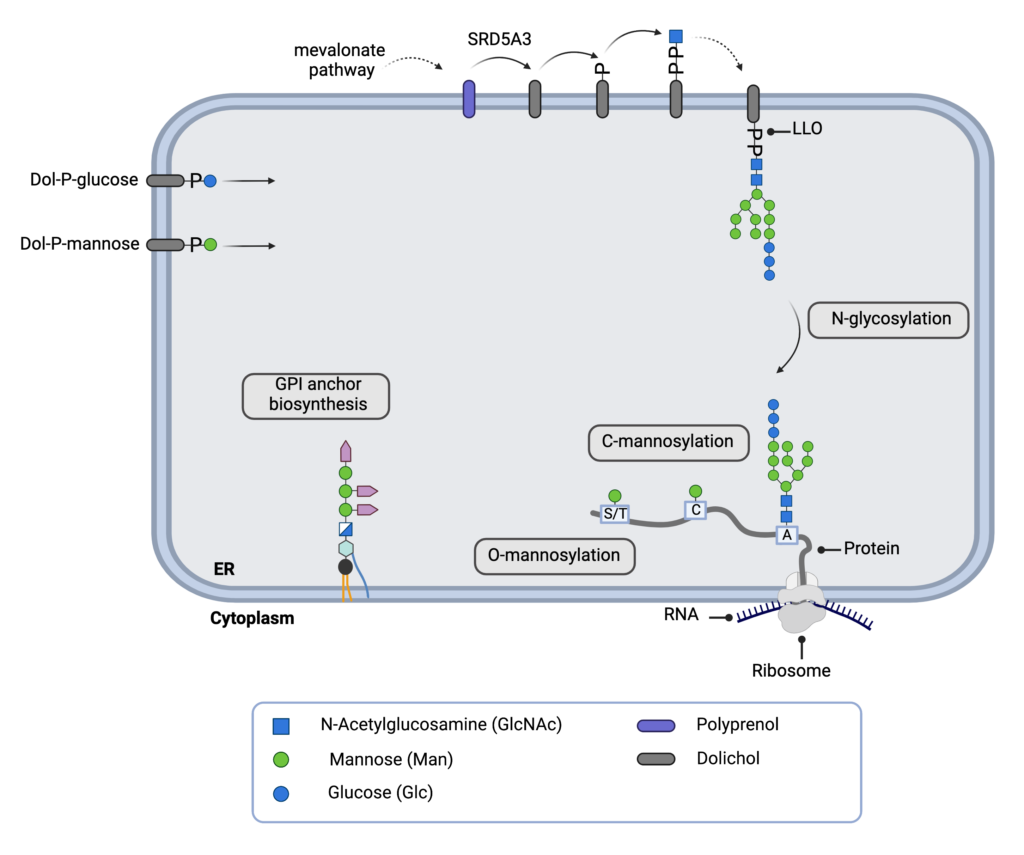 RD5A3-CDG, formerly known as CDG-Iq, is a rare inherited condition that affects several body systems. To date, approximately 50 cases of SRD5A3-CDG have been reported in the literature. SRD5A3-CDG is classified as a disorder of multiple glycosylation pathways and can be subcategorized as a disorder of dolichol metabolism. It is caused when an individual has mutations in both copies of the SRD5A3 gene, which provides instructions for making an enzyme that converts the molecule, polyprenol, into dolichol – a lipid that is needed for different types of glycosylation. Mutations in the SRD5A3 gene reduce the availability of dolichol, leading to proteins and lipids with abnormal sugar chains. Symptoms of SRD5A3-CDG begin in infancy and commonly include neurological abnormalities (problems with balance and coordination, low muscle tone and intellectual disability) vision loss early on in life, eye abnormalities, unusual facial features and skin symptoms. Some individuals may present with heart and liver problems and feeding difficulties. A screening test is available for SRD5A3-CDG but a definitive diagnosis is achieved through genetic testing. There are currently no approved treatments for SRD5A3-CDG but gene therapy and drug repurposing are currently being explored in pre-clinical studies. Current treatment focuses on managing specific symptoms and preventing complications.

The protein encoded by this gene belongs to the steroid 5-alpha reductase family, and polyprenol reductase subfamily. It is involved in the production of androgen 5-alpha-dihydrotestosterone (DHT) from testosterone, and maintenance of the androgen-androgen receptor activation pathway. This protein is also necessary for the conversion of polyprenol into dolichol, which is required for the synthesis of dolichol-linked monosaccharides and the oligosaccharide precursor used for N-linked glycosylation of proteins. Mutations in this gene are associated with congenital disorder of glycosylation type Iq.

SRD5A3 plays a key role in early steps of protein N-linked glycosylation by being required for the conversion of polyprenol into dolichol. Dolichols are required for the synthesis of dolichol-linked monosaccharides and the oligosaccharide precursor used for N-glycosylation. Acts as a polyprenol reductase that promotes the reduction of the alpha-isoprene unit of polyprenols into dolichols in a NADP-dependent mechanism. Also able to convert testosterone (T) into 5-alpha-dihydrotestosterone (DHT).